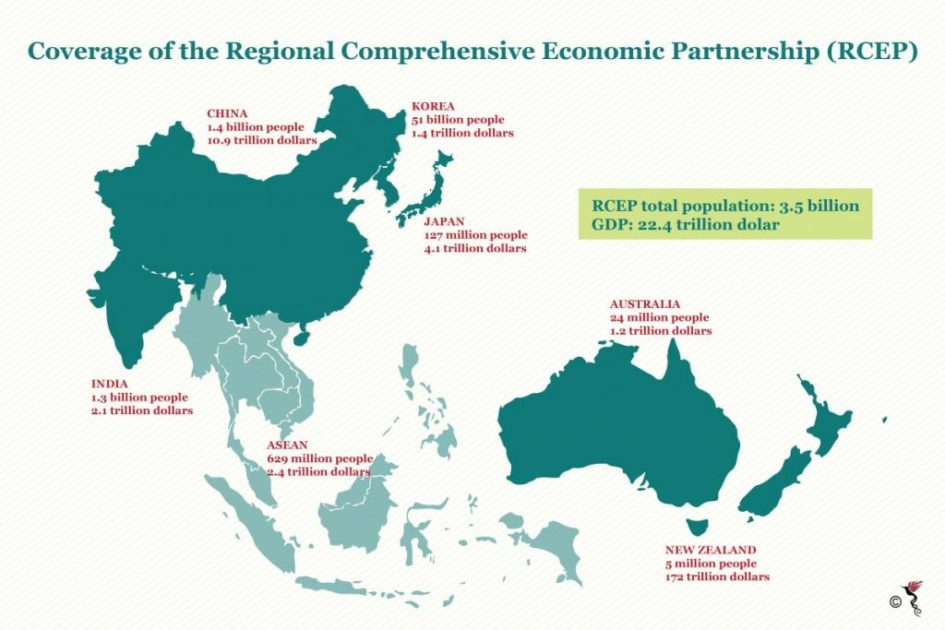 The world trading bodies like WTO has been vociferous in curtailing raising tensions emanating from the nations protectionist stand of carrying out the trade. It has begun since the U.S started imposing tariff hikes on its global imports with least concern for multilateralism. As such global uncertainties prevail regional grouping started to gain momentum and this article deals with one of the worlds largest trading bloc when countries accompanied to partner with members of the region for trade and investment.

RCEP is a regional comprehensive economic partnership aimed to form a framework to lower trade barriers and secure improved market access to goods and services for business in the region. With such a spirit to strengthen economic linkages and to enhance trade and investment-related activities among the member nations includes 10 ASEAN members and their free trade partners including China, India, Australia, Japan, NewZealand and Republic of Korea.

This largest trading bloc, when signed an agreement, in the world accounts for nearly 45% of the world’s population with a combined GDP of 21.3 trillion dollars. It gains a considerable clout especially after the U.S withdrawal from trans pacific partnership(TPP). Though the cooperation among member countries tend to provide viable economic linkages some of the countries still have issues with the outline of the agreements.

India is among the countries that will have to take a call, considering the changing dynamics of world trade dominance from the west to this part of the world. There are demands from the other RCEP countries lowering customs duties on a number of products and greater access to the Indian market. But Indian standpoint of resistance has been the demand to liberalize their services regime and allow free mobility of Indian workers. Being pioneers in the software industry, Indian advantages has traditionally been in services compared to mercantile goods. The trade deficits in the country is also due to the untapped potential of services in the Chinese and ASEAN markets that are not being able to be accessible to Indian services.

The recent negotiations of the free trade agreement with ASEAN economies have featured this point of greater market access to Indian service. The trade wars came as a boon in disguise as Chinese markets has been allowed to Indian exports of agricultural and pharmaceuticals. Though it has been early banned and subjected to the imposition of import duties, Indian competitive advantage lies in this sectors.

With such trade dynamics around the globe,  RCEP offers the nation at the rulemaking process in regional trade and security architecture.  Though India’s demands are not been acceptable to many countries the solution lies in continuous engagement in such platforms without giving much room for dominance of China.

RCEP recognizes the importance of being inclusive, especially to enable SMEs leverage on the agreement and cope with challenges arising from globalization and trade liberalization. As many of the member countries are dominated by SME sectors provides mutually beneficial scope for the nation. With the recent thrust by the government to revive this sector, India needs to pursue RCEP in its commitment to provide fair regional economic policies that mutually benefit the member countries.