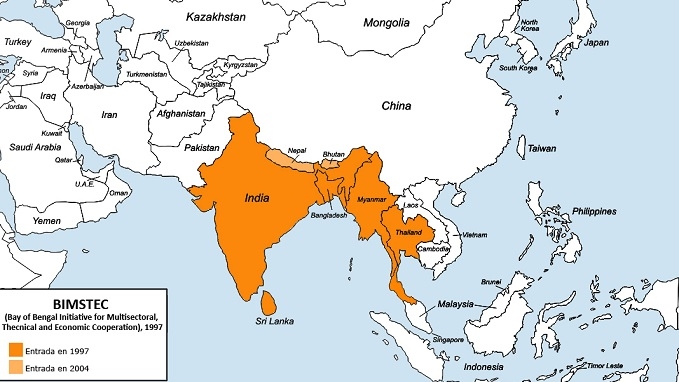 The European and ASEAN experience is a testimony to the contribution of regional cooperation for promoting the economic growth of countries. In that way, BIMSTEC acts as a bridge between south and south-east Asia except Maldives, Afghanistan, and Pakistan. Recently concluded BIMSTEC members came out with a Kathmandu declaration indicating the need for cooperation during this uncertain global period of western powers like the U.S imposes heavy duties on the emerging market in pursuit of its domestic policy.

BIMSTEC has emerged as a natural platform with its geographical proximities as a means to cooperate trade and investment. It hosts a population of around 1.5 billion approx 21% of the global population with cumulative GDP of 2.5 trillion shows the potential for improvement in growth. Later it’s been recognized by most members of the South Asia like India, Srilanka, Nepal, Bhutan, and Bangladesh about the regions growing trade potential which has been traditionally been undermined by SAARC.
South Asian Association for Regional Cooperation(SAARC) was initiated by India but considered a nonstarter because of the regressive policies of Pakistan. Despite, India’s keen interest in cooperating and strengthening intraregional connectivity by backing SAARC initiative like motor vehicle amendment, it has been stalled for Pakistan’s reluctance. Similarly, the SAARC satellite project, proposed by India was abandoned following the objection from Pakistan. Though, China is not a member in SAARC the recent activity suggests it has been cozying with Pakistan for increasing dominance over the south Asian region. Chinese grand plan for the region by one belt and one road(OBOR) initiative of building massive infrastructure project has already been granted by Pakistan opening access to Chinese investments. India also time and again contended the project’s plan as it has been crossing the disputed PoK region. So, India withdrew from participating OBOR considering it’s uncompromisable stand on maintaining sovereignty claims.
While the majority of Southeast and ASEAN region has been supportive of India’s growing leadership as a balance to Chinese economic muscle. But India’s limitation on offering huge sums of a line of credits proved to be a blessing in disguise. These grants in Hambantota project has dragged the Srilankan nation into the debt trap. While India has been giving thrust to some of the crucial projects like
The political rivalry between India and Pakistan never allowed SAARC to be the driving factor in augmenting the regional cooperation with South Asia. As a conventional supporter of the multilateral framework in upholding the rule of law and respect for sovereignty, BIMSTEC offers a wide scope for India to act as a responsible leader in the conduct of affairs in the neighborhood and bay of Bengal region.